As most of you are more than certainly aware, I like web mashups. They are always practical, and never a waste of time.

For some time now I have searched the Internet for what I consider to be the "perfect storm" of mashups: a combination of 1) Google, 2) Facebook, 3) Bubble Breaker and, of course, 4) Meat. It would appear that this particular breed of mashup is indeed a niche market, for I have been unsuccessful in my quest thus far. Truly, the dearth of availability has been disheartening to say the least.

Until now! I have implemented and present to you now the only known mashup* of Google, Facebook, Bubble Breaker and Meat: Meat Buster: The Embedded Public Wave Gadget Of The Game 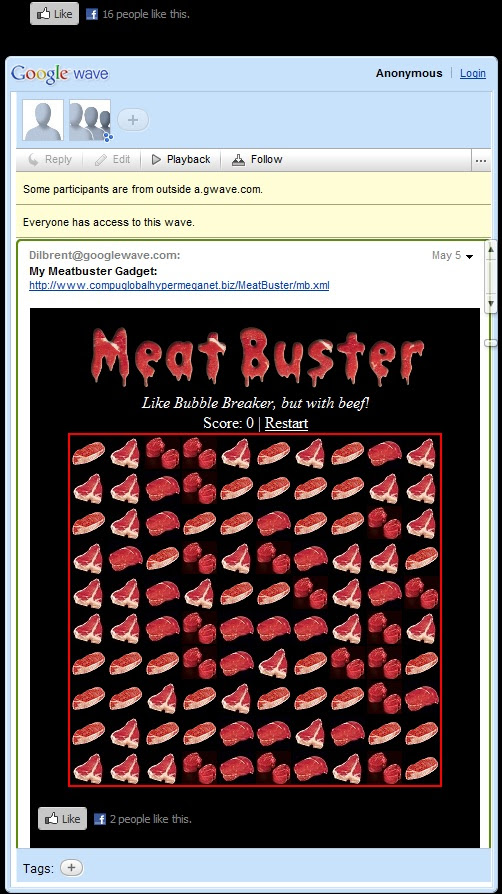 What you are looking at is a beef-themed version of Bubble Breaker, running as a Google Wave gadget inside an embedded public Wave, with separate Facebook "like" buttons on the gadget and the container page. And quite frankly, what's not to "like?" <---Clever.

The Embedded Google Wave of the game**:
http://www.compuglobalhypermeganet.biz/MeatBuster/wave.html

The stand-alone version of the game:
http://www.compuglobalhypermeganet.biz/MeatBuster/
_________

* I actually didn't look very hard. If Google and Bing can't find one, what chance do I have?

** Unfortunately embedded waves do not work properly on IE yet. Please try Chrome or Firefox if you are currently running IE, or use the stand-alone version, or don't bother; it's just Bubble Breaker with beef.
Posted by Brent at 7:37 PM